The Last of Us

During the Development of Uncharted 2, “Neil Druckmann” Naughty Dog’s Creative Director watched Planet Earth. The docu was showing a Parasitic fungus snibbing  onto an Ant, infecting them and taking control of their brains. These  ants lost control over their tiny bodies and shoved  off somewhere to die, their bodies ended up  becoming the carrier of these horrific  fungal sprouts.

When matured they send off spores to infect other creatures close by, with thousands of types of these fungi each specialized in one species he wondered, what would happen if it would  be able to infect us?  Both “Druckmann” and his game Director “Bruce Straley” agreed that a game based on truth would make a more  compelling game and so the Idea  for The Last of Us was Born.

To prepare for the development of The Last of Us they spend time to do some homework on the Cordyceps fungus and other real living parasites. Their study found that the Cordyceps is not the only creepy parasitic predator out there.

They didn’t just want to create the usual survival horror game, they wanted to add more color and natural beauty to the mixture. The Clickers are a good example of that, these transformed humans ended up being infected by cordyceps for such a long time that their heads are nothing more than heaps of colorful fungal. These details really show throughout the entirety of the game. The Last of Us was already a fantastic Game on the PlayStation 3, but with the extra power of the PlayStation 4, it allowed them to use the models from the game’s cutscenes and use them directly into the Gameplay segments, which resulted in more detail.

I am personally not really a stickler for things like  Graphics but looking back to this game I  always believed that it was not just about  the pixels but also about the art  direction and the attention to detail which is in my opinion top notch. I agree that some parts may look better than others, but, it suffers less from the  muddy textures pop-ins and  jaggies it had in its original  release.

And with that, I genuinely think that the foliage, and  surrounding buildings, its interiors, and character designs  for this released version do not only look and feel fantastic  but, it also offers a believable world where both  protagonists need to move  through.

This leads me to the sound design which really compliments and strengthens all those  visuals by a mile’s length. In its purest form, the lack of sound in any given situation will create a strong feeling of paranoia that cannot be matched!

I really think that  “Naughty Dog” nailed their sound design in such a way that it  accommodates all the other three  pillars of the game which makes it a lot stronger. Some may even argue that the sound outshines the Gameplay but I honestly beg to  differ. If any, it has complimented the Gameplay as a whole and without all these facets the Game wouldn’t have become what it is now.

The Last of Us does not only  shine through its  graphics and  the game sound  design but also through its  minimalistic game scores created  by Gustavo Santaolalla who composed the music for the game early in its  development stage. With  only a few directions given by the devs on the tone intended, they aimed for an emotional direction as they were clearly opposed to creepy.

The game  music was nominated for a few rewards, several tracks even became so popular that they were covered by YouTube artists all over the world who were inspired by Gustavo Santaolalla’s work and brought their personal interpretation of the music.

The Game delivers strong believable characters from start to finish, and even those that do not stick around or are written out of the storyline are memorable in some way. The Games opening scene starts with “Joel” coming home, his daughter “Sarah” lying on the couch sleeping and waiting for him to come home to give him his birthday present. This scenery really felt natural to me, a father and a daugther jokingly  interacting with each other. This is something that I  can relate to  since me  and my  daughter are in many ways the  same. Looking at  the entire story I do feel that this game is in touch with a lot of real live highs and lows.

Joel is a middle-aged man whose family was stripped away from him by the virus outbreak which puts him far away from “Ellie” who is a teenager born and grown used in the world she lives in. You are set on a pad to keep this girl that you barely know safe, you try to  survive and tackle  obstacles in this post-apocalyptical  world where the narrative  strength lies  within its cut  scenes.

I think what made their relationship very relatable was how real it was, they didn’t like each other and they had to build a relationship from the ground up, they struggled through their journey and they only had each other to rely on!

You will live into the moments of a heartbroken father who  tries to keep his distance to protect his emotional state and  of a girl who is  considerably foul-mouthed and  impulsive by nature. She is not easily scared and  she uses profanity  to express herself, she clearly mentions several times that she does not need any babysitter! The relationship between Joel and Ellie starts off a bit hostile, neither of the two seems to like each other but you feel that they grow more attached the more you progress through the game and story. By  the end of the game “when Joel needs to make a choice” those that are intimately immersed with these two well-developed  characters will realize that  when you look  back to your journey, you eventually would have done the same thing.

The voice acting  delivered by the actors are from the highest level. From Tess “Annie Wersching” who is a hardened  survivor of the  outbreak to  David a wicked hebephile “Nolan North” who is the  same actor that voiced  Mr. Drake in  the Uncharted  series. They all performed first class  acting to the point that it felt like the real thing. Looking back to the making off I understand why!

The tip of the spear, however, is the connection that grows between Joel “Troy Baker” and Ellie “Ashley Johnson“. you surely can not ignore  the mistrust and the initial annoyance that Ellie feels for Joel’s  surliness towards her at the  beginning of the  game. the way they portrayed their characters through their voice is unique and rarely seen in games. The chemistry and bond you feel between them can in my opinion only be adored and appreciated if you let yourself grow with these two phenomenal characters.

The Game makes use of a  third-person perspective with gunplay, melee and a cover system similar to “The Uncharted”  series, however,  they  have a different feel to them.  Mechanically they lean close to one and another, but, the pace,  atmosphere, and tone make both IP’s stand out from each other. With better anti-aliasing and 60 frames per second released on the  remastered version  of the Game, the overal Gameplay  feels a lot more  responsive, detailed and more  to the point  that it had ever  before.

While The Last of Us is admittingly linear, the level designs are done so  cleverly that the world feels open with multiple options to pick from to complete the levels in the game. This  immediately opens possibilities for some replayability  if you do so desire!

You can approach certain levels of the game with blazing guns and melee if you mess up, but, you are mostly encouraged to use stealth.  Especially on higher difficulties it is adviced not to break stealth at all! In some situations creating a noise will end up in you being swarmed. Sound is therefore purposely designed to halt a player’s motion, to route them to act a lot more cautiously.

Most of us will do almost anything to kill the silence in creepy cituations, we either talk, sing or whistle a tune to ourselves, or, turn the TV or the Radio on. We do this to break the silence and to fabricate an indirect feeling of safety.

That  feeling of safety is often  shortlived when you hear the sound of the infected  roaming around. The devs really brought the silence in this Game to a new height and whenever you think that you are safe a “Clicker” can be heard in the distance waiting to tear your party apart. While Clickers have a huge handicap “lost eyesight” they are one of the most dangerous enemies roaming around in the Game. These enemies are based on a prime time story where a 14-year old blind boy  learned to use echolocation.

The use of the more natural cover system implemented in this game may help you to move around these type of enemies more freely, Scattered debris lying around like stones and bottles can be used to create a slight advantage. The game also offers an intuitive crafting system to create all kinds of items, you will need ingredients to craft them which you will scavenge on the way.

Supplies are often scarce, especially on Survivor difficulty you will need to micro-manage your limited resources for when they are really necessary. The Last of Us has been in my personal experience not to complex nor too super hard even on the highest difficulty. However, I really think the devs did a very, very good job to keep me on my guard, with a few surprises here and there!

Ellie responding to David “a hebephile” after she snaps his finger:
Tell them that… Ellie is the little girl… that BROKE YOUR FUCKING FINGER!!! !

The Last of Us: Remastered 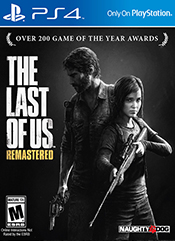